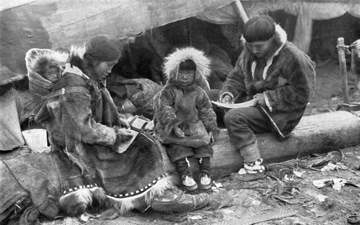 Our Tribe is composed of individuals that God has gifted to us through biological and adoptive means. It is composed of sisters, brothers, sons, daughters, nieces, nephews, fathers, mothers, and grandchildren.

According to the dictionary, a tribe is:
1.     a social division of people or a division of society whose members have ancestry, customs, beliefs, and leadership in common
2.     a large family
3.     a group of people with something in common such as an occupation, social background or political viewpoint

Historically and traditionally, adoption was practiced in most tribal communities through custom and ceremony. Most tribes did not practice termination of parental or familiar rights. It is unfortunate that adoption became a negative thing, due to the forced assimilation of policies and as a tool to destroy native families and culture. Because of this trauma, many native tribes abhor adoption in the connotation of the majority culture's definition.

It is important to note that when we speak of our tribe through birth and adoption, we are not in the practice of assimilation of others into our ways of doing things. We believe in the sovereignty of individuals and the gift of choice that Yahweh has bestowed upon us all.

The process of adoption is important to us and not something that we enter into lightly. We treat these members that have been adopted with the same respect and commitment in which we honor our biological family.

We are so honored that the Creator established us among these people, biological and adoptive, that make up our tribe. We are so proud of each one of these individuals. We are laboring to build a house not made by hands alongside of them, something eternal through Yahweh, that will be a dwelling fit for the presence of Yahweh. We want to build a tribe that will endure the tests of time and build a generation of God-fearing men and women.

We are so very proud to introduce them to you.


Cindy and Eric Sandras and their two children. Eric has a Ph.D. in Human Development and Family Relations and has authored four books (When The Sky Is Falling, Mystics, Mavericks, and Miracle Workers with Jason Chatraw, Plastic Jesus, and Buck-Naked Faith); he is the spiritual life pastor at Mountain Springs Church.

Scott and Shelley Switzer and their six children. Scott is an award-winning professional artist and Shelley is a Certified Expressive Arts Practitioner (C.E.A.P.), passionate about art and practices a variety of creative disciplines including writing, painting, mosaics, and drumming, among others; she has worked extensively in the arts to build expression and self-esteem in the lives of children and has experience in working with issues of sexual abuse, addiction, grief and bereavement, adoption, personal and cultural identity, gender relations, and more.

Together Scott and Shelley have created The Parasha Project: Sacred Ritual, New Perspectives, Intimate Interaction, Innovation, Creativity, and Patronage. The first nine Torah portion pieces are hanging in the Great Synagogue in Jerusalem. Parasha is a Hebrew word meaning "section or division" a reading from the Torah: refers to a schedule of weekly passages by which the entire Torah is read in one year. This way of reading the scriptures dates from around 537 BC after the Babylonian captivity.